Inspiration: Dougie Down the Pet

Justine Curvengen has developed a number of great paddling films over the last few years, and has become well known for her series This is the Sea, a thrilling collection of sea kayaking adventure films. She recently expanded her paddling portfolio to canoes with This is Canoeing, and I bought this collection for Sean for his birthday last year. We were excited to find that one of the short films followed Canoeroots Publisher Scott MacGregor and his young son Dougie on a four day trip down the Petawawa River in Eastern Ontario, Canada. Dougie is excited to be on the water, and clearly loves paddling alongside his dad, except, perhaps when his little stuffed animal gets wet during a tricky rapid descent. Scott talks about some of the modifications he has made to his paddling style in order to bring Dougie along on these adventures, and the enthusiasm of both father and son is infectious. This film definitely got us thinking about the possibilities, and gave us some great ideas for keeping kids excitement  levels high during uncomfortable conditions.

Check out the whole film collection by clicking on the picture below. 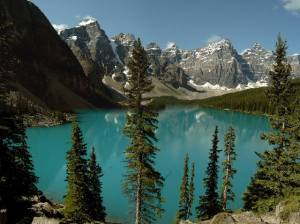 In what he described as a “monumental undertaking”, Aaron Teasdale, a Montana based writer-photographer, took his two young sons on a 6-week mountain bike backpacking expedition from Glacier National Park in Montana, to Banff National Park in Canada.  Teasdale and his sons rode a massive triple-seater mountain bike, which allowed the two smaller boys to keep up with their father, but caused them to have to invent some tricky bike maneuvers to get over the many fallen trees that blocked the rough trail they were following.  His wife Jaqueline accompanied them and towed along a BOB trailer that contained much of their gear and food. Check out these links below to follow his journey and see pictures of a VERY cool family-style mountain bike.

How We Did It

In 2007, filmmakers Karsten Heuer and Leanne Allison, along with their 2 year old son Zev and their border collie Willow,  set out to explore the landscapes of Canada as immortalized in the writings of Farley Mowat.  To do so, they had to canoe, hike and sail over 5000 miles  from the midwestern prairies of Canmore, Alberta  to the shores of Cape Breton Island in Nova Scotia. Along the way they passed through native villages, went north across the barrens to Hudson Bay, and encountered a great variety of wildlife, including one memorable scene where they have to canoe right past a polar bear. The bugs nearly drove them insane and the deep, muddy portages practically sucked the boots off their feet, but all three pushed on to their final destination. Their two-year-old son, Zev, seemed to take the whole trip in stride, and exhibited a calmness throughout the journey that makes me think about how kids adjust to what’s “normal” in their lives. If a child grows up thinking that pulling a canoe upstream through thickets and rapids is how life happens, he won’t be upset when put in that situation. If a kid is raised in front of a television and never learns to self-amuse, he’ll likely shatter under the strain of such a journey. Since we probably aren’t going to do such a long and involved journey,we’ll have to find some sort of middle ground.  It’s this sense of living with the wild as “normal daily life” that we really want to foster in our own kids.

Finding Farley has won awards at several major outdoor film festivals, including the top prize at the 2009 Banff Film Festival. You can watch the entire film at Heur and Allison’s website,  Neccessary Journeys.