The Last of the Snow? 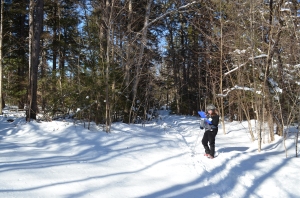 This was what we were up to only 2 weeks before we had 80 degree beach weather! Photo by Sean Donohue 2012

I live in New England, which means that even though it has edged into the eighties a few times in the last few weeks, I’m not sure I can get away with declaring that our outing last weekend involved the “last of the snow”, but I certainly hope that’s the case. Our little man-cub had a great time rolling around in the snowbanks with the dog, but is still confused by his mittens. He has outgrown his snowsuit, so we had to improvise and put a second set of mittens on his feet. I just tucked the thumbs in to keep them from catching on something, and he was good to go.

Around here we are gearing up for spring sports, which in our case means hiking and paddling. Since I was pregnant last year at this time, I haven’t done much paddling other than sit in a canoe in over a year, so it will take a bit of work to get my skills back in line enough to prepare for some of the trips we have planned for the summer. Each trip we have planned is supposed to be an easy one; some go to islands less than a mile from the put-in, some involve easy treks down flatwater. But, much like the weather itself, the easiest trip can become a challenge if the wind kicks in, or there is a lot of rain, or something critical in the gear fails, so I am beginning both a physical and a skills-based tune-up. I’ve been going through drybags, planning meals, and researching the few critical pieces of baby gear, such as a life jacket, that we still need to buy. I’ll get out on the water with Sean a few times in the next few weeks and work out the kinks on some warm-up paddles.

So far the kiddo loves any and all water he’s come into contact with. Our goal for the summer is to keep it that way…