Walking on the shores of the bay… 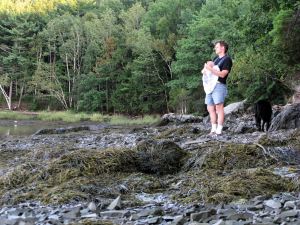 The other night we decided to head out to one of our favorite places along the bay and see how the conservation lands had handled Tropical Storm Irene. Even though we got hit less directly than originally predicted, we still had some fierce winds and about 4 inches of rain, and I expected to find a lot of debris along the shores. I was surprised to see the shores looking pretty much as they usually do, piled with seaweed and the occasional chunk of driftwood. I think we’ll see more trees and other items showing up in the next few weeks as they come down the rivers and empty into the bay, and I wonder how the oysterbeds will fare with all the toxins that usually get flushed into the bay during high water events.

It was a perfect night for no-see-ums and mosquitos, so we got out our little mosquito netting cover and bundled the Kiddo up pretty tight. There was enough of a breeze to keep him clear of bites when we were on the shore, but as soon as we got into the woods the swarms started coming.

We were back at the car as the sun was setting.It wasn’t a dramatic adventure: no deep thoughts or brilliant inspirations. Just a peaceful night along the shore. I’ll take it.

And now, a video with a special guest star…

Categories: Our Story | Tags: infants, our story | Leave a comment

Join 15 other subscribers
Life is either a daring adventure or nothing. ~Helen Keller